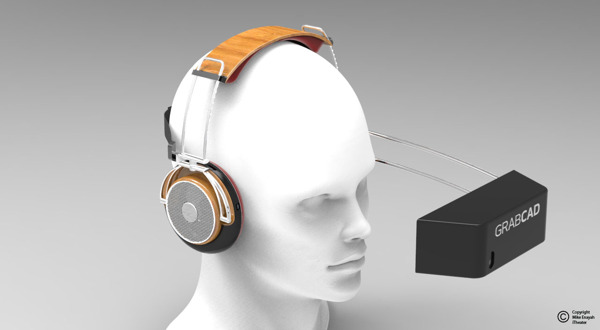 In this age of mercurial technological advancement, there is one trend that remains nigh constant: small is beautiful. In this regard, designer Mike Enayah has tried to follow the ‘micro’ dictum by conceptualizing his very own home theater system, powered by none other than the exalted iPhone.

Christened as the GrabCAD, this design is contrived as the evolutionary form of personalized entertainment. The device in itself comprises of a very cool looking headset that is attached to a placeholder in front of the eyes. The iPhone is to be fixed to this placeholder, thus giving a hands free solution to the user. The placeholder also allows the proportional scaling of the iPhone screen, so as to enrich the movie watching experience. In fact, one of the aims of the design is to create at least the same level of audio visual treat as a conventional home theater system. Now, it is naturally quite difficult to judge the pros and cons of this particular headset, given its nascent conceptual stage. However, from the perspective of economics, a micro home theater system should come in cheap as compared to its much bigger and boisterous cousins. On the other hand, practicality dictates that the stylish headset may be too bulky for adaptable usage. This can certainly prove to be commercially indecisive, especially since there have been earlier iPhone oriented headsets that have been shot down because of their heftiness.

So, at the end of the day, the GrabCAD remains one of those iPhone inspired contraptions that certainly has potential. However, to salvage itself from the already crowded market, the ultimate design needs to trim down while also being economically viable.