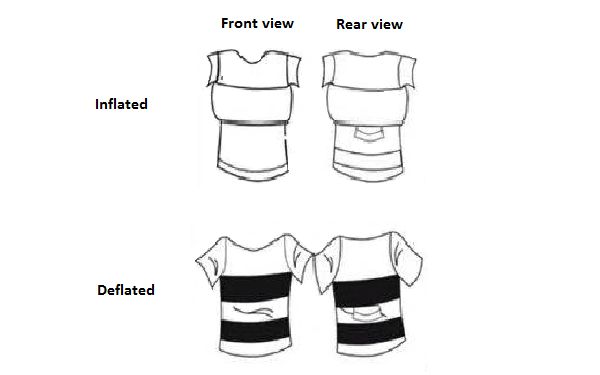 A team of girls studying at the Girls Leadership Academy of Arizona have come up with an innovative wearable invention for the children aged two to four when they are playing around swimming pool. Named ‘Watawescue,’ it is a cozy and comfortable T-shirt that turns into a life preserver by inflating automatically when it gets soaked into water.

A mechanism consisting inflation bladder is sewn into a mesh fabric, which wraps like an inner tube under the arms whereas a carbon dioxide cartridge and alarm mechanism have been kept in a small pocket at the back of the T-shirt. According to Briana BB Soto, a senior at GLAAZ,”If accidentally a child falls into the water, the mechanism will stop working and the bladder will be inflated below the arms.” The working is simple when the T-shirt gets immersed into water the cartridge sealed with bobbin will dissolve making the compressed gas to pass through a vibrating mechanism producing loud sound while inflating the tube. The loud sound will serve as an alarm to the nearby parents or guardians while the tube will keep the toddler afloat. The process will only take place if the toddler gets fully soaked. Spilling milk or running under a sprinkler will not provide sufficient liquid to dissolve bobbin hence, avoiding accidental inflation. The inspiration behind the T-shirt concept is the need of their community. It was noted by her that in first six months of 2012, fifteen children were the victims out of 46 of the drowning deaths in Arizona.

The team is also been selected among the 16 teams for the 2012-2013 Invensteams Program, a Lemleson-MIT initiative to encourage students of high school about invention and career in science and mathematics. The project will be showcased at MIT in June, 2013 and the girls will receive up to US$10,000 to complete their T-shirt as well as get advice from academic and industry mentors in their community.