We want our cameras and robots to wearable so that we can see a whole new world of augmented reality from their eyes. While Microsoft is doing something of sorts with their shoulder-mount multitouch Kinect-powered projector that converts any surface into a gesture-sensing display, here we have a wearable robot concept from Active Vision Laboratory, which explores larger environments automatically viewing augmented reality on objects of interest. The wearable robot assistant comprises a shoulder mounted self stabilizing active camera and a handheld touch screen display.

The wearable robot system features a compact and stable shoulder collar mounted with an IDS uEye USB 2.0 camera on one shoulder and inertial measurement unit (IMU) on the other shoulder. The camera sans the need of an external power source makes whole unit more cable-free. The wearable robot is made flexible with 3 built-in servo motors and suitable for 3D mapping by mounting a second camera on the reverse of the handheld touch screen display, which allows the user to use the display as a magic lens for augmented reality apps. 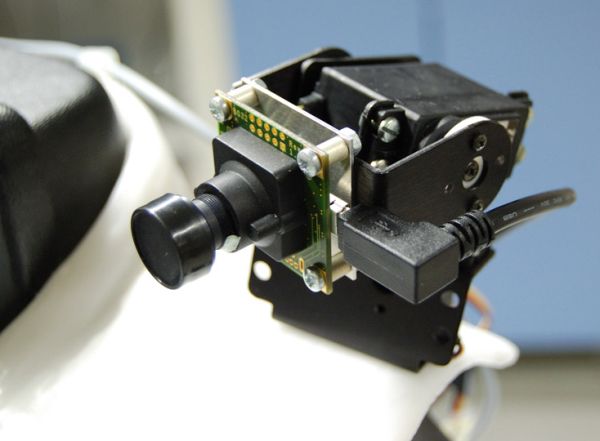